Vaginal bleeding is very common during the first trimester of your pregnancy. Many women suffer through the vaginal bleeding process in their early pregnancy and are necessary not a sort of concern. However, sometimes, it might lead to unconditional changes and can be a source of concern for both the baby and the women’s health. It is therefore important to know the underlying causes of it and get it checked by your doctor at the earliest. This ensures that you and your baby both are healthy and there are no uncertain complications involved.

Many people confuse between spotting and bleeding. However, spotting is very common during the first 12 weeks of pregnancy. Spotting is reported by 20% of the women and is necessary not a cause of concern for women. Bleeding is a different case and its signs in early pregnancy are normal. To find whether you are facing through vaginal bleeding during the first few days of your pregnancy, the blood is going to be lighter than the menstrual period on and it is pink to red to brown. Many women start freaking out after they start experiencing vaginal bleeding, it doesn’t mean that you are not going to carry on further with your pregnancy and baby.

What is the difference between spotting and pregnancy?

Vaginal bleeding is defined as the discharge of the blood from the vagina. This is common and can happen anytime from the time of conception when the egg and sperm are fertilized until the end of pregnancy. It is very common to experience light bleeding during the first trimester of your pregnancy and is no cause for alarm. Spotting and bleeding are very different from each other, wherein spotting is when you notice some drops of blood occasionally on your underwear. Bleeding, on the other hand, is heavier than blood and you will need a liner or a pad to soak it. Both spotting and bleeding should be reported to your healthcare provider to make them aware of the condition.

What are the causes of spotting during pregnancy?

Also termed as implantation bleeding, spotting is an early action in the pregnancy and it generally happens when the fertilized eggs attach to the uterine lining. This results in a little rusting of the uterine lining and can result in a little bleeding or spotting as well. This spotting happens before the female gets to know that she is pregnant and is mostly conceived as the pending period of blood. In case of bleeding, which occurs when the female is expecting her period to start isn’t considered as implantation bleeding and is going to serve as the early signs of pregnancy. This is also misunderstood as periods but its composition is a lot different than the normal menstrual blood. The implantation of the embryo to the uterine lining is one of the causes of spotting or vaginal bleeding.

The other common cause of spotting is the rupturing of the cervical polyp. A cervical polyp is a harmless growth on the cervix that often bleeds during pregnancy due to the higher levels of estrogen in your body. This bleeding generally occurs as the cervix starts experiencing an increased number of blood vessels during IVF pregnancy. Even the slightest contact with the area by sexual intercourse and or gynecological examination can result in bleeding.

Other reasons for spotting in a female can be a result of sexual intercourse, gynecological examination, or heavy weightlifting and exercising.

What are the causes of vaginal bleeding in women during the first trimester? 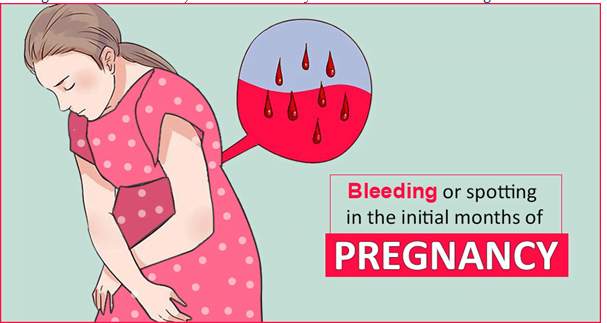 Spotting or vaginal bleeding during pregnancy is generally considered to be abnormal and is generally a big concerning factor for both the couple and the baby. You must contact your healthcare provider to discuss your symptoms and indulge in an examination. If you are experiencing vaginal bleeding during the first trimester, then it is mainly because of the following reasons:

If you had sex with your partner

Due to an infection

Due to implantation of the egg in the uterus

This is also termed as implantation pregnancy and is common. This mainly results due to the implantation of the egg and the sperm fuse embryo on the uterine lining and resulting in pregnancy. As the uterine lining rupture a little, it is common to go through some vaginal bleeding on your underwear. This is not a cause of concern and that does not mean that you are not pregnant.

Certain hormonal changes in your body

One thing that you have to understand is that you will be going to a very haphazard emotional balance chart when you’re pregnant. Your estrogen and progesterone levels are on the rise to support your pregnancy, which then might result in vaginal bleeding as well. There is no serious worry that in it and it is particularly normal for women.

This is one form of pregnancy in which the fertilized egg is attached outside the uterus and inside the fallopian tube. If the embryo keeps on growing in that form, it will result in the fallopian tube to burst out, that can be life-threatening for the mother, the embryo, on the other hand, will not survive. This is termed as ectopic pregnancy and is very dangerous. This type of pregnancy is very rare, occurring in only 2% of pregnancies. The symptoms of ectopic pregnancy include strong cramps, pain in the lower abdomen, and lightheadedness as well.

Also termed as gestational trophoblastic disease, it is one of the rare causes of vaginal bleeding. It occurs when an abnormal tissue grows inside the uterus instead of a baby. This might give you the assumption of pregnancy wherein the abnormal tissue growing can turn cancerous as well. It can spread to other parts of the body and is the most common cause of molar pregnancy. The symptoms of pregnancy are nausea, vomiting, and rapid enlargement of the uterus.

Vaginal bleeding can cause miscarriage as well which tends to be the biggest concern with first trimester bleeding. However, before coming to any conclusion you first have to go for an ultrasound, and if the heartbeat is seen that they are not going to miscarry.

What Are The Causes Of Vaginal Bleeding In Women In The Second And Third Trimester?

If you suffer from vaginal bleeding during the second and the third trimester of your pregnancy, it will lead to serious consequences and is a point of concern for pregnant women.

It is a condition, in which the placenta sits low in the uterus and is covering the opening of the birth canal in partial or full forms. Although this condition is very rare, the bleeding is generally painless and requires emergency action to be taken.

Rupturing of the uterine

A scar in the C-section can easily tear open during pregnancy and can be life-threatening. This one condition requires immediate emergency action. The symptoms of uterine rupture are pain and tenderness in the abdomen.

It is a condition, in which the umbilical cord or the placenta can cross the opening of the birth canal. And it results in the form of vaginal bleeding. This is very dangerous for the baby as it will result in a lack of oxygen and should be treated immediately. Symptoms of vasa previa include abnormal fetal heart rate and excessive bleeding.

It might be a sign that you are ready to deliver the baby. Vaginal bleeding can make you go into labor as well. Premature labor symptoms are contractions, vaginal discharge, abdominal pressure, and ache in the lower back.

Whatever be the case, complications in pregnancy can pose life-threatening results for both the mother and the baby. That is why it is advised to indulge in regular checkups with your doctor every alternative week.

The Best Gym Equipment for Pregnancy

8 Factors that Have Influence Over Your Baby’s Development