9 Myths About Peptic Ulcer You Should Stop Believing

Those with diabetes in their family or with diabetic friends might be more cautious than most when it comes...
Read more

Clinical applications of Machine learning in Radiology It is important to diagnose the patient correctly as the medical part of...
Read more 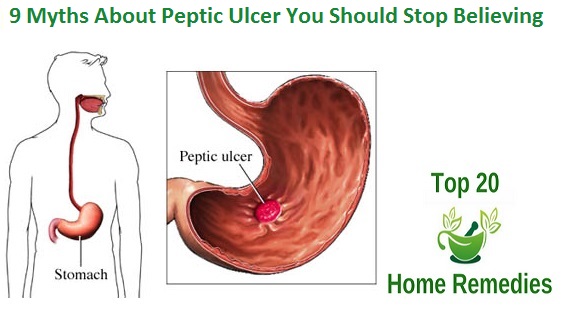 The word ‘ulcer’ is sometimes misunderstood. A lot of people have come to believe that an ulcer is synonymous with a burning abdominal pain, well, that isn’t exactly the case.

Ulcers simply mean sores or wounds. They can be found on the skin, mouth, anus and of course the digestive system. When they occur in the stomach and intestines, they are often related to the acid present in the stomach, hence the word ‘peptic’ is used.

In this article, we would be debunking myths about peptic ulcer, a condition that has so many untrue statements flying around about it. Let’s dive right in.

When a person develops peptic ulcers, the usual statement you probably will hear from your friends is that your condition is caused by spicy foods like pepper, garlic, and onions, and you need to stay away from these. Well, this isn’t true.

The peptic ulcer is typically caused by two things:

This is how ulcers develop in the stomach and intestines:

The stomach has a very strong acid that helps it digest food. Because this strong acid is very corrosive, the stomach wall secretes a very thick protective mucus layer to protect itself from being digested by the acid it produces.

Scientists found out that Helicobacter Pylori lives in many people’s stomachs and has some acid-resistant properties. It leads to a breakdown in this defensive barrier, hence the stomach acid comes in direct contact with the stomach or intestinal walls, leading to sores or what we call peptic ulcers.

Also, NSAIDs are a very good class of painkillers, however, they are notorious for reducing the defensive mucus barrier in the stomach, leading to the increased likelihood of developing peptic ulcers. Peptic ulcers can be very uncomfortable, they produce a characteristic ‘burny’ abdominal or lower chest pain.

2. Peptic Ulcers are caused by stress

Stress, just like spicy foods can worsen existing ulcers but don’t cause ulcers. The thought that being very busy or having a tight schedule can automatically create wounds in your stomach isn’t true and should not be believed at all.

Ulcers are very treatable, especially when they have not caused a major complication. They are managed by addressing the cause. In the case of a bacterial infection by H. Pylori, doctors prescribe multiple medications like a combination of antibiotics and drugs that decrease the stomach’s acid production.

If an ulcer is caused by taking NSAIDS, doctors advise that you use alternative painkillers like paracetamol or may prescribe opioids if the pain is severe. Once NSAIDS are stopped, with time, and the use of supportive medications, the ulcer should heal.

Once treated, you can go about your normal routine activities. It is not like asthma that can be triggered, once an ulcer has healed, it has healed. You may not necessarily have a recurrence.

4. Taking milk is the treatment

Some people suggest that taking white foods like milk and potatoes can help treat peptic ulcer. If you’ve been following this post, you can figure out why it isn’t true.

Milk or potatoes don’t have any features that enable them to seal off or speed up the healing of the sores in the digestive system, sometimes milk can even make the pain worse. Milk contains lactic acid, which may worsen the ulcers.

I always suggest that people avoid self-medication, especially when it comes to issues like this. Antacids only attempt to neutralize the effect of the stomach acid temporarily but do not address the main problem- the sores.

Antacids could be used as an adjunct to antibiotics and drugs that reduce the acid stomach’s acid to make the wound heal, but they won’t treat an ulcer when prescribed alone.

6. You should avoid all painkillers

You should avoid NSAIDs if you have been diagnosed with the peptic ulcer, but not all painkillers. Medications like acetaminophen (paracetamol) and opioids don’t cause or worsen ulcers. However, please consult with a doctor before taking any medications on a regular basis. Self-medication could be dangerous, and opioids can cause serious adverse side effects like constipation (when you go a long time without pooping).

7. They only occur in the stomach

The word ‘peptic ulcer’ is not limited to stomach ulcers. Other parts of the digestive where ulcers occur commonly are the lower end of the esophagus (the food pipe) and the duodenum (the first part of the small intestine. Duodenal ulcers are fairly common

8. They just cause abdominal pain and are not so serious

Peptic ulcers can be life-threatening if they develop complications. A common way this happens is that when a person doesn’t get treatment, the stomach’s acid can deepen the sore till it gets to blood vessels, leading to an internal bleed and the passage of bloody stools.

Another complication is that an untreated ulcer can lead to a perforation of the stomach or small intestine, causing food to leak out into the abdominal cavity.

Both of these are potentially life-threatening situations.

9. You can drink alcohol even if you have an ulcer

Alcoholic beverages should be avoided as much as possible if you have the peptic ulcer. Alcohol use is actually one of the risk factors for developing ulcers and can actually worsen an already existing one.

Peptic ulcer doesn’t last a lifetime and can be treated. It is important to ignore all the common lies that are being spread around about it. We have been able to know what exactly it is, how it works, what causes it and its treatment.

If you have an abdominal pain, notice a change in your stool color or think you have a peptic ulcer, you should see a doctor, and get it treated as soon as you can.

How to prevent recurrent infections

Recurrent infection: How it affects the immune system? The immune system is the defensive mechanism of your body. You need...
Read more
Home remedies

How to overcome social anxiety disorder SAD in children

How to reduce obesity naturally at home

What is obesity Obesity is influenced by a combination of factors, which usually results in consuming more calories than the body needs. These factors may...
Read more
Home remedies

Those with diabetes in their family or with diabetic friends might be more cautious than most when it comes to the development of diabetes....
Read more

Clinical applications of Machine learning in Radiology It is important to diagnose the patient correctly as the medical part of the treatment in medical science....
Read more

Guinea is not a chicken but good protein source who needs something more than the hen. Guinea fowl meat is often called "poor man's...
Read more