Top 20 Remedies ! Home Remedies for Anything 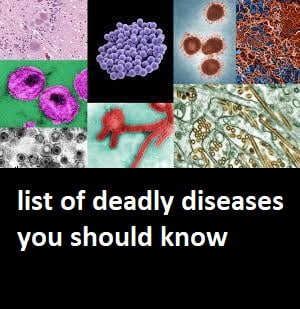 Five Deadly Diseases,  You Should Care About

By flipping over the pages of history, it is evident that humans have been suffering and thus battling deadly contagious diseases since birth. It’s a bitter reality that these life-threatening diseases are mostly incurable, yet quality healthcare and other preventive measures can lower their risk. Millions of people have been dying, mainly by ignoring the issue and late diagnosis.

Here is a list of deadly diseases you should know

Lower respiratory infections, a fifth leading cause of mortality and sickness among children and adults both, are the infections that affect the lungs, lower airways, or anything below the throat. They are considered to be more serious than the upper respiratory system, so more health budget is consumed to prevent this deadly disease.

Its major infections include bronchitis, pneumonia, and bronchiolitis, which is more common in children. Its symptoms vary from person to person and depend on the severity of the infection. Common symptoms include a runny nose, dry cough, fever, sore throat, chest pain, and wheezing; they can be severe or mild.  The following are the common lower respiratory infections.

It is the irritation and swelling of the airways leading to the lungs and starts with severe or mild cough resulting in acute illness.  It usually lasts for two weeks and puts a clear ban on one’s daily activities.

Using antibiotics won’t work in these cases, they can’t kill the virus. Your healthcare provider may suggest some pain relievers and expectorants, which are worth soothing. Your severe cough and difficulty in breathing can be treated by prescribing suitable inhalers. So if you have the mentioned symptoms seek medical attention before worsening the situation.

It is the inflammation of the small airways in the lungs, causing illness in children below two years, yet it is more common in babies below six months. It is usually mild but sometimes causes a high-grade fever that the children have to admit to the hospital for extra and proper care. Wheezing and coughing are common symptoms. Consult your doctor immediately if you watch any of the above symptoms in your baby.

It is an infection of the lungs and frequently causes death. It usually occurs as a complication of an upper respiratory infection.

Severe cases need to be hospitalized to save a patient’s life. It can be viral or bacterial or even inhaled chemicals can be its reason. Antibiotic is majorly used to treat pneumonia, but other medications are also recommended according to the symptoms. The influenza vaccine is greatly helpful to reduce its risk.

COPD is a term used to describe progressive lung diseases that are currently incurable. Developed countries are the major hit as tobacco smoking, and direct long-term exposure to burning fumes, particularly cigarette smoke are its leading causes. Shortness of breath, coughing, wheezing, and tightness of the chest are common symptoms.

COPD includes emphysema, chronic bronchitis, and refractory (non-reversible) asthma. Though its cure doesn’t exist proper treatment and better life adjustments will enable you to have a healthy life.

Breathing is directly related to the lungs, but COPD causes the expansion of bronchial tubes to present inside the lungs, and they become less elastic, and the exhaling process doesn’t work properly. COPD patients are more likely to develop heart disease, lung cancer, and several other deadly health issues. A little ignorance may worsen the problem and diagnosis at the right time is only possible if a thorough evaluation is performed at the right time. Let’s talk about the diseases that occur under COPD.

It’s a common condition contributing to COPD. It is characterized by inflammation and severe damage to the alveoli. Alveoli become larger and do not absorb the required oxygen. Similarly, the exhaling process is also blocked because small airways collapsed, and stretched lungs subsequently make the patient becomes out of breath and starts coughing.

Damage to the bronchial tubes causes chronic bronchitis. Swollen bronchial tubes are responsible for Bronchitis. The tiny hair cilia in the tubes are lost which moves the mucus up to the tubes. As a result, more mucus is produced, which causes increased coughing. Again shortness of breath, severe coughing, and producing mucus are common symptoms.  If coughing lasts for two years, bronchitis becomes more complicated and changed into chronic bronchitis.

Refractory (non-reversible) asthma is quite different than normal asthma. As in normal asthma, the tightening and swelling of bronchial airways can be treated through proper medication, but in refractory asthma, the situation can’t be reversed back.

Reduce Your Risk for COPD

It is the second leading cause of child mortality, specifically in children under five years old. In this, a patient passes three or more loose or liquid stools per day or vomits three or more three times. Passing formed stool is not diarrhea.

It is easily avoidable by making healthier life changes. Clean drinking water, adequate hygiene, and smart food choices simply say goodbye to the diarrheal disease. It is a leading cause among children of and below five years.  It is characterized by intestinal infection and can be caused by a variety of several bacterial, viral and parasitic organisms. It can last for many days and thus creates severe dehydration and food loss.

Filthy water, unhygienic food, and improper hygiene spread the infection, and malnourished children are severely attacked as they are having impair immunity against this life-threatening infection.

Its major types include acute watery diarrhea lasting for hours or days, acute bloody diarrhea also called dysentery, and persistent diarrhea is lasting for 14 days or longer.  ORS or zinc supplements are commonly recommended to shorten the diarrheal period and maintain the water level. Seafood from polluted water is an additional contributor to the infection.

This life-threatening disease can be prevented by taking the following steps:

Respiratory cancers are the major public health problem due to the increasing pollution and excessive use of tobacco. Women or children of third-world countries are at greater risk due to the increased exposure to air pollution and face severe health issues leading to death. Nearly 4 million deaths are annually recorded throughout the world as a result of this terrible disease. Respiratory cancers are the cancers of the main organs of our respiratory system, such as the lungs, larynx, trachea, and bronchus.

The common symptoms, risk factors, and chances of survival greatly differ according to the location of the cancer. Improved living conditions and reducing open exposure to burning fuels as in welding and industrial work are quite effective steps to curtail the main sources of the problem.

It includes Lung cancer, cancer of the trachea, larynx, and cancer of the bronchus are all characterized by cough, even coughing up blood, breathlessness, chest pain, and hoarseness.

During the Vietnam war from 1961 to 1971, a defoliant chemical was used by the US military which did not only collapsed the natural environment but also caused respiratory infections among millions of individuals who were exposed to the chemical.

There is no hard and fast way to prevent respiratory cancers, but with the help of the following, you can reduce the risk.

Diabetes is a metabolic disorder characterized by high blood sugar levels.  When insulin, a hormone made by the pancreas doesn’t do proper functioning of helping glucose to enter your body cells, this extra glucose stays in your blood, resulting in increased sugar level. Symptoms include increased thirst, increased hunger, and frequent urination. Acute complications and deadly health problems occur if diabetes is not treated properly.

The most alarming thing about diabetes is that it has no cure at all yet healthy changes in diet plan and smart life adjustments make this life-threatening disease manageable.

All minor problems become serious if one has diabetes. If deliberate and appropriate treatment is not followed, it may lead to several long-term complications, including heart diseases, chronic kidney diseases, and severe damage to the eyes. It has three types, namely type1, type2, and gestational diabetes.

Prevention is always better than cure, and in the case of diabetes, a healthy diet plan and regular exercise reduce its risk. Proper care and taking insulin greatly help the patients to manage the disease and thus enjoy life fully.

Having a great smile and perfect teeth is something we all wish for. Nowadays, there are many ways in...
Home remedies