Obesity is influenced by a combination of factors, which usually results in consuming more calories than the body needs.

These factors may include physical inactivity, diet, genes, lifestyle, ethnic and socioeconomic background, exposure to certain chemicals, certain conditions, and use of certain drugs.

Being obese increases the risk of many disorders, such as diabetes, high blood pressure, heart disease, and certain cancers, and can result in early death.

Increasing activity and reducing caloric intake is essential to treating obesity, but some people benefit from also taking drugs. 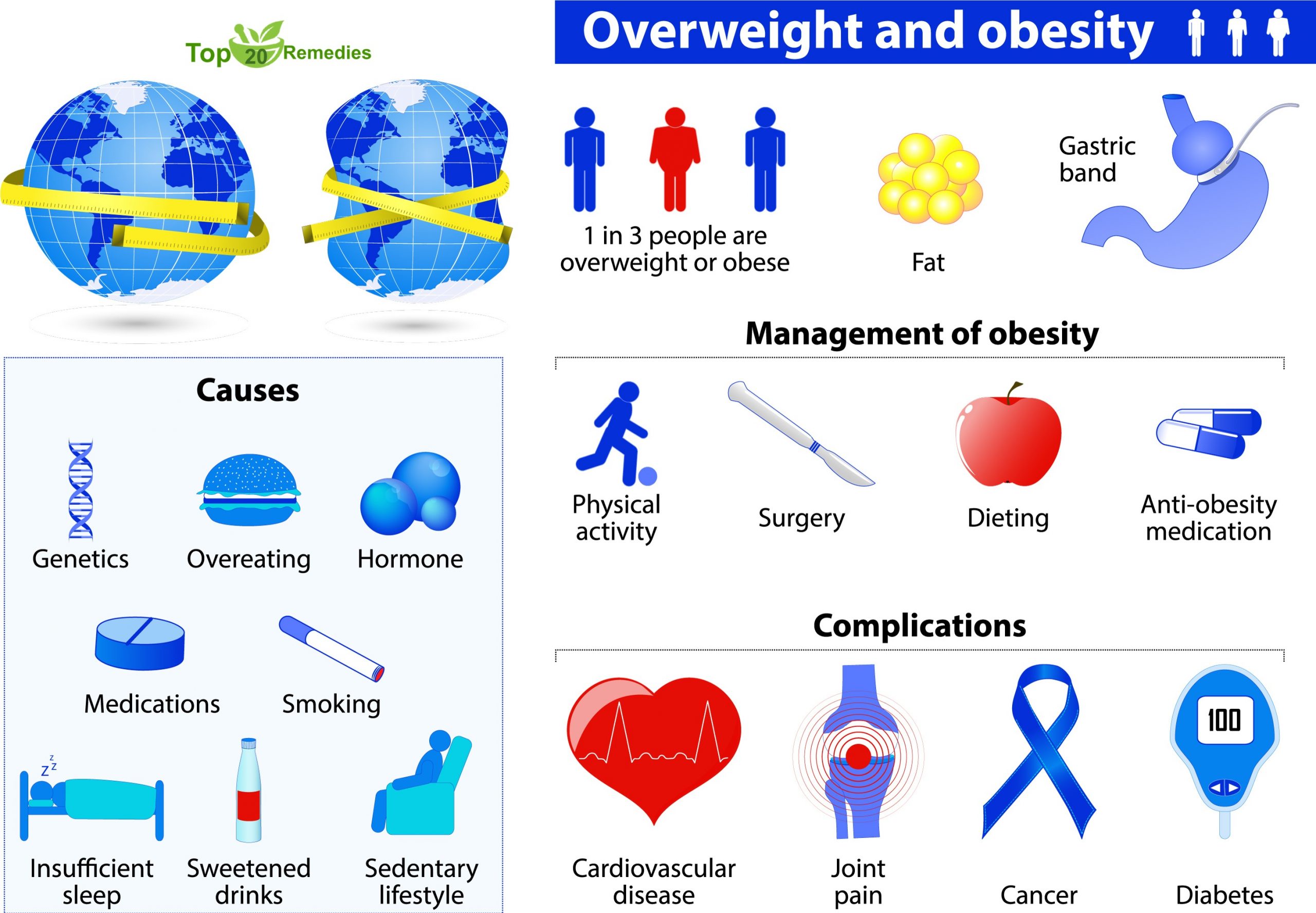 Losing as little as 5 to 10% of body weight can help lessen weight-related problems, such as diabetes, high blood pressure, and high cholesterol levels.

The body mass index (BMI) is used to define overweight and obesity. BMI is the weight (in kilograms) divided by height (in meters squared):

Obesity has become increasingly common throughout the world. In the United States, obesity is very common. More than one-third (36.5%) of adults are obese, and more than 25% of children and adolescents are overweight or obese. Also, severe obesity has become more common.

Obesity is much easier to prevent than treat. Once people gain excess weight, the body resists losing weight.

Obesity results from a combination of factors, including the reduced opportunity for physical activity, the increased availability of high-calorie foods, and the presence of genes that make obesity more likely. But ultimately, obesity results from consuming more calories than the body needs over a long period.

Excess calories are stored in the body as fat (adipose tissue). The number of calories needed varies from person to person, depending on age, sex, activity level, and metabolic rate.

A person’s resting (basal) metabolic rate—the number of calories the body burns while at rest—is determined by the amount of muscle (lean) tissue a person has and the person’s total body weight. The more muscle people have, the higher their metabolic rate.

Changes in the bacteria that are normally present in the digestive system (called gut flora) may increase the risk of obesity.

Normally, these bacteria help the body by helping it digest food among other things. Changes in the number and types of bacteria in the digestive system may change how the body processes food.

In developed countries, lack of physical activity is common and contributes to the increase in obesity. Opportunities for physical activity have been engineered away by technological advances, such as elevators, cars, and remote controls.

The diet in developed countries is energy-dense. That is, it consists of foods that have a large number of calories in a relatively small amount (volume). Most of these foods contain more processed carbohydrates, more fat, and less fiber.

For example, a 12-ounce soda or bottle of beer has 150 calories, and a 12-ounce coffee beverage (containing dairy and sugar) or fruit smoothie can have 500 or more calories. High-fructose corn syrup (used to sweeten many bottled beverages) is often singled out as being particularly likely to cause obesity.

However, recent studies show that it is no more likely to cause obesity than other foods with a similar number of calories in sugar.
Larger portion sizes at restaurants and in packaged foods and beverages encourage people to overeat.

Also, restaurant and packaged foods are often prepared in ways that add calories. As a result, people may consume more calories than they realize.

Obesity tends to run in families. However, families share not only genes but also the environment, and separating the two influences is difficult. Genes can affect how quickly the body burns calories at rest and during exercise.

Many genes influence weight, but each gene has only a very small effect. Obesity rarely results when only one gene is abnormal. Rarely, mutations in the following genes result in obesity.

This gene controls the production of leptin, a hormone made by fat cells. Leptin travels to the brain and interacts with receptors in the hypothalamus (the part of the brain that helps regulate appetite).

The message carried by leptin is to decrease food intake and increase the number of calories (energy) burned. A mutation in the ob gene prevents leptin production and results in severe obesity in a very small number of children. In these cases, administration of leptin reduces weight to a normal amount.

Gaining weight during pregnancy is normal and necessary. However, pregnancy can be the beginning of weight problems if women do not return to their prepregnancy weight.

About 15% of women permanently gain 20 pounds or more with each pregnancy. Having several children close together may compound the problem. Breastfeeding can help women return to their prepregnancy weight.

If a pregnant woman is obese or smokes, weight regulation in the child may be disturbed, contributing to weight gain during childhood and later.

Sleep deprivation or lack of sleep (usually considered less than 6 to 8 hours per night) can result in weight gain. Sleeplessness results in hormonal changes that increase appetite and cravings for energy-dense foods. Stopping smoking usually results in weight gain.

Nicotine decreases appetite and increases the metabolic rate. When nicotine is stopped, people may eat more food, and their metabolic rate decreases, so that fewer calories are burned. As a result, body weight may increase by 5 to 10%.

Binge eating disorder is characterized by bingeing—eating large amounts of food during a short amount of time—and usually by feeling guilty, remorseful, or out of control. Most affected people do not purge (for example, by vomiting or using laxatives or diuretics).

Binge eating disorder is diagnosed when bingeing episodes occur at least twice a week for 6 or more months. Night-eating syndrome involves not eating much during the day, consuming a lot of food or calories in the evening, and awakening to eat in the middle of the night. Rarely, taking a sleeping pill, zolpidem, can cause similar problems.

The most obvious symptom of obesity is a change in a person’s appearance.
Complications of being obese increase the risk of many health problems. Virtually every organ system can be affected.

These weight-related health problems can cause symptoms, such as shortness of breath, difficulty breathing during activity, snoring, skin abnormalities including stretch marks, and joint disorders Obesity can increase the risk of early death.

The more severe the obesity, the higher the risk. In the United States, 300,000 deaths a year are attributed to obesity. It is the second most common cause of preventable death (cigarette smoking is the most common).

Obesity can lead to social, economic, and psychological problems. For example, obese people may be underemployed or unemployed, or they may have a poor body image and low self-esteem.

Obesity is diagnosed by determining BMI. However, BMI has some limitations. The BMI does not take sex and age into consideration and makes only a few adjustments based on ethnic group.

For Asians and some other ethnic groups, the BMI that is considered overweight is slightly lower.

Also, BMI does not distinguish between lean and fat tissue. Therefore, doctors may be unsure whether a high BMI is due to muscle (for example, in bodybuilders) or excessive fat.

In such cases, they determine body composition (the percentage of body fat and muscle). Typically, blood tests are done.

Knowing how large the waist is and whether the metabolic syndrome is present helps doctors estimate the risk of certain complications (such as heart disorders) better than knowing what the person’s BMI is.

Doctors also check for other disorders that are common among people who are obese, such as obstructive sleep apnea, fatty liver, and depression.

Successful weight loss requires motivation and a sense of readiness. Most successful people have realistic goals and recognize that healthy weight loss can be achieved only with lifelong lifestyle changes rather than a magic bullet or fad diet that cannot be sustained.

Seeking the support of health care practitioners such as dieticians or doctors can be beneficial. Support from family members is also crucial.

Programs that require regular contact, such as Weight Watchers, increase accountability and can increase the likelihood of success. Typically, weekly meetings are conducted by counselors and supplemented with instructional and guidance materials.

Reducing the number of calories consumed by 500 to 1,000 calories a day may be expected to result in a weight loss of 1 to 2 pounds per week, which is a healthy rate of weight loss.

This approach usually means consuming 1,200 to 1,500 calories a day. However, the body may adjust to the decrease in calories (for example, by decreasing the metabolic rate).

Thus, weight loss may be less than expected. Still, consuming a high-fiber diet plus reducing the number of calories by about 600 calories a day and substituting some carbohydrates for protein appears to be the best way to lose weight and keep it off.

Weight can be lost more rapidly with a very low-calorie diet, but such diets should be supervised by a doctor.

The following changes in diet are recommended:

Lifestyle activities can burn a considerable number of calories. People who do not exercise while dieting is more likely to regain the weight they lose.

For example, vigorous walking can burn about 4 calories per minute, so that 1 hour of brisk walking per day burns about 240 calories.

Running burns about 6 to 8 calories per minute (about 360 to 480 calories per hour). As a general guide, people need to walk at least 150 minutes each week to promote health.

To lose weight and keep it off, people need to spend 300 to 360 minutes each week doing moderate physical activity or 150 minutes doing vigorous aerobic exercise (such as running or using an elliptical machine).

To get the most benefit from exercise, people should do strength training (with weights or another form of resistance) about 3 days a week.

Strength training increases the amount of muscle tissue, which increases the metabolic rate so that the body burns more calories when at rest.

Health Benefits of Dendrobium and Potential Side Effects

Health and wellness activities for adults with disabilities

How does bariatric surgery work for gastric bypass

How to enlarge the male reproductive organ

Importance of marriage and family counseling

How to get rid of chiggers on skin