To What Extent Should you Follow a Diet? Right when you start an eating routine, the goal isn't to get...
Read more

In this world of overflowing data and complicated and hectic work life, very few people care about their mental...
Read more 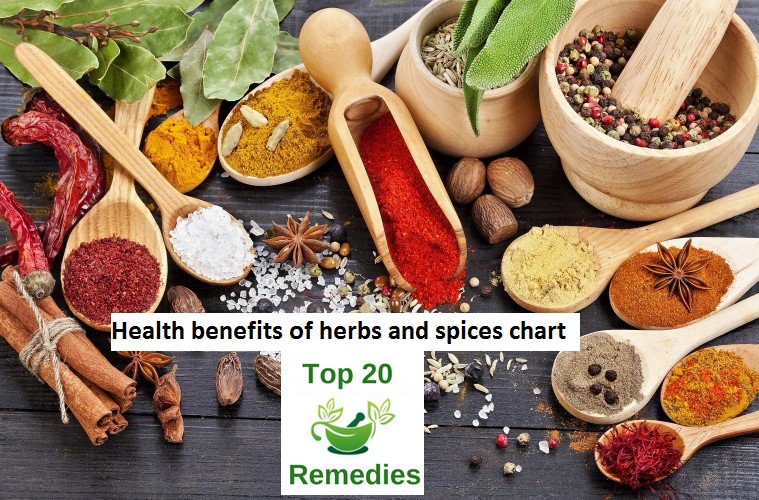 list of herbs and spices and their health benefits

Science confirms the medical benefits of many common ingredients

Research shows that many common herbs and spices contain components that can lower cholesterol, improve blood sugar levels, and increase resistance to infection.

Many ordinary ingredients found on kitchen spice racks have powerful medicinal properties. Herbalist and folk practitioners have used plant remedies for centuries, but only recently have scientists begun to study the powers of common herbs and spices. Not surprisingly, research is confirming much what our ancestors already knew–many herbs and spices do indeed contain powerful preventative and healing properties.

A common garden plant, and prevalent flavor in Mediterranean cuisine, basil has long been used to aid digestion, and ease stomach cramps and constipation. A member of the mint family, basil is also said to have a slightly sedative effect and has been recommended by some herbalists for anxiety. Others also claim basil is a helpful memory enhancer, though these uses have yet to be scientifically confirmed. However, research has confirmed basil’s antibacterial components.

Dr. Tieraona Low Dog of the University of Arizona’s College of Medicine explained this attribute in a talk to health care professionals attending the May 2007 Conference on Nutrition and Health in New York City. In the past, before refrigeration, basil was used to not only to flavor food but to help preserve it. Dr. Low Dog states that due to this property basil can be used topically on wounds as an antibacterial to aid healing.

This aromatic herb often used to flavor meat dishes, also lends its zesty aroma to cosmetics and soaps. Traditionally rosemary infusions have been used to enhance memory, and as a mild analgesic to relieve headaches and other minor body aches and pains. In October 2007, a research group from Burnham Institute for Medical Research in La Jolla, California reported that the active ingredient in rosemary, carnosic acid, may protect the brain from free radical damage that potentially could lead to strokes and neurodegenerative diseases such as Alzheimer’s.

All the alliums (onions, garlic, chives, leeks) contain allicin, a component that inhibits bacterial, fungal and yeast growths. For this reason, raw garlic has traditionally been used to treat ailments like colds and flu. Cooked garlic is not as effective because some of garlic’s curative properties are destroyed by heat.

In the October 1993 edition of Annals of Internal Medicine, three doctors published a review of studies from around the world showing garlic effective in lowering serum cholesterol in people with high cholesterol levels. They found that eating a garlic clove a day, over a period of time, significantly reduced cholesterol levels. Garlic is one of the safest herbs to use as it does not cause a reaction in most people.

Used by the ancient Egyptians in their embalming fluids, and in culinary traditions around the world, cinnamon was once considered more valuable than gold. Recently, Japanese studies identified a number of antibacterial properties in cinnamon, but perhaps the most promising study is the one reported in the December 2003 Diabetes Care Journal. It explains that Type-II diabetics are up to four times more likely to have heart disease than the general public.

Researchers looking for nutrients that would improve blood sugar levels as well as lower blood lipids, found cinnamon to have this double effect. The study showed that 1 gram (about a quarter teaspoon) of cinnamon per day lowered glucose levels by 18 to 29 percent, triglycerides levels by 18 percent, and cholesterol levels by 12 percent.

In a study conducted by the USDA’s Human Nutrition Research Center in Beltsville, Maryland, and reported in the 2000 Journal of Agriculture and Food Chemistry, 49 herbs, spices, and medicinal plants were evaluated for glucose lowering components. Cinnamon was found to be the most effective, followed by witch hazel, green and black tea, and allspice.

Herbs and spices have the potential to add more than rich flavors to our diet. As scientists are discovering, many may improve our overall health.

How to relieve stress and depression naturally

In this article, I will explain how to relieve stress and tension without the help of drugs or alcohol....
Read more
Home remedies

In this world of overflowing data and complicated and hectic work life, very few people care about their mental health. And as a result,...
Read more

If you are one of those who visit hospitals often, you will agree that the cost of prescription drugs is not cheap. There are...
Read more