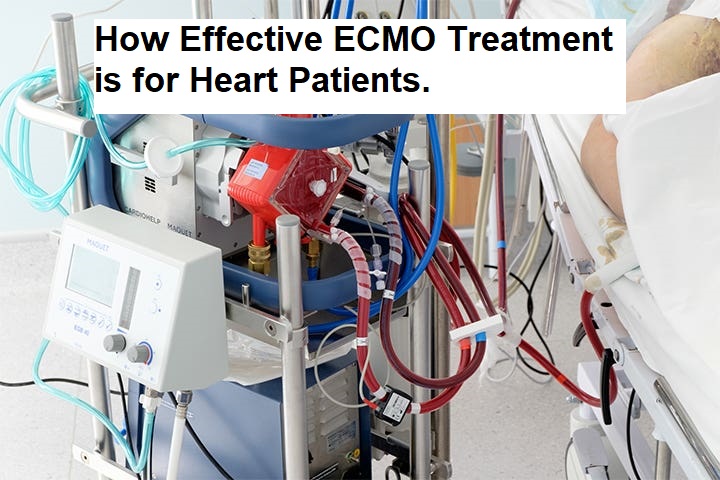 According to an international registry, most patients use extracorporeal membrane oxygenation (ECMO) for severe COVID-19 survival. In-hospital mortality was estimated to be 37.4% after 90 days, while mortality among those who finished their hospitalization (final disposition of death or discharge) was 39%.[1]

When Is ECMO Used?

ECMO in India is used for people who have had heart failure, lung failure, or cardiac surgery.

When doctors want to check the health of other organs such as the kidneys or the brain before undergoing heart or lung operations, a bridge option to further treatment is used.

For use in the cardiac catheterization lab during high-risk operations. As a stepping stone to a heart-assistance device, such as a left ventricular assist device (LVAD).[2]

As a stopgap measure for patients waiting for a lung transplant, the ECMO keeps tissues adequately oxygenated, making the patient a better transplant candidate.

A surgical operation is required to place a patient on ECMO. However, it is usually performed in the patient’s room. To prevent blood clotting, the patient is sedated and given pain medicine as well as an anticoagulant.

The ECMO catheters are inserted into an artery or vein by a surgeon with the help of an operating room team.

An x-ray is then taken to make sure that the tubes are in the proper position. A patient using an ECMO pump is usually also on a ventilator, which aids in healing the lungs.

Specially trained nurses, respiratory therapists, and the surgeon and surgical team watch the patient while on ECMO. Supplemental nutrition will be given intravenously or through a nasal-gastric tube because you will be sedated and have a breathing tube in place. Food can be administered intravenously or via a nasogastric tube.

Medications such as heparin are used to prevent blood clots, antibiotics to prevent infections, and sedatives to reduce movement. They also help improve patients’ sleep, diuretics help the kidney get rid of fluids, electrolytes help keep a proper balance of salts and sugars, and blood products from replacing blood loss may be given to you while on ECMO. The tubes must be removed surgically before ECMO may be stopped.

Several tests are routinely performed before ECMO therapy is stopped to ensure that your heart and lungs are ready. The vessels will need to be repaired once the ECMO cannulas are withdrawn.

This might be done in the operation room or at the patient’s bedside. The doctor will close the wound where the tubes were inserted with tiny stitches. For this procedure, you will be asleep and watched. Even if you are no longer on ECMO, you may need to use a ventilator.

There are some dangers associated with ECMO, including:

Different Types Of ECMO In India

Commonly known as VA ECMO. It is coupled to a vein or an artery for proper blood circulation. Veno-Arterial ECMO is used when both the heart and lungs are unable to function properly.

VV ECMO is a machine that is connected to more than one vein and it facilitates support to the lungs. The VV ECMO machine drains deoxygenated blood, oxygenates the blood, and then pumps it back to the same venous chamber.

ECMO in India is usually used when a patient is suffering from heart or lung failure. However, patients who have undergone heart surgery earlier are also suggested for ECMO.

ECMO can be also used as a bridge option after a successful heart or lung surgery to check if other organs are functioning properly or not.

3 After A Heart Attack

Doctors recommend the use of ECMO for providing support to the patient’s life after a massive heart attack.

4 After A Lung Transplant

ECMO is also used for patients who need a lung transplant. This helps in keeping the tissues adequately oxygenated which helps the patient’s body ready for the surgery.

How ECMO Is Used to Treat Patients in India.

The ECMO is a machine that simulates the heart and lungs’ functions. At Max Hospital in India, it is primarily employed during open-heart surgeries, when our surgeons bypass the organs’ functions to the machine while fixing it.

The ECMO equipment assists in pumping and oxygenating blood outside the body, freeing up the lungs and heart. At Max Hospital, the success rates of ECMO therapy have been exceptional, and it has saved the lives of hundreds of patients.

To ensure the most acceptable treatment for their patients, the institution has the best panel of doctors and state-of-the-art technology. There are two forms of ECMO:

VV ECMO: This is a type of ECMO connected to one or more veins near the heart. When only the lungs are afflicted, it is utilized.

VA ECMO: This type of ECMO is attached to both a vein and an artery. It’s utilized when both the lungs and the heart are malfunctioning.

In patients recuperating from lung failure, heart failure, or cardiac surgery, ECMO is employed. When doctors want to assess the health of other organs or when patients are waiting for a lung transplant, it can also be utilized as a bridge.

Conditions That Necessitate the Use of Extracorporeal Membrane Oxygenation (ECMO)

The challenges in the technique of ECMO in India are many. Awareness about the efficiency and right doctors for ECMO, choosing the correct equipment, travel stoppages during transport, cost factors of the entire procedure, and availability of monetary resources are some of them.

Solutions to some of these problems are easy to figure out, while some need to be thoroughly addressed.

Awareness among the medical society and education of the general public is extremely important to undergo ECMO surgery at the right time. There is the availability of regular training programs which are being conducted at regional levels.

Awareness among doctors and hospitals is increasing, but there is a long way to go to achieve the required awareness in public education.

As more and more experiences turn into randomized studies, society guidelines, and broader acceptance of this life-saving medicine, it is hoped that its use will become the standard of care.

Currently, only individuals who have observed firsthand the seemingly miraculous survival of patients who would otherwise die are allowed to utilize it.

Need to learn more about this? Call our specialists today!