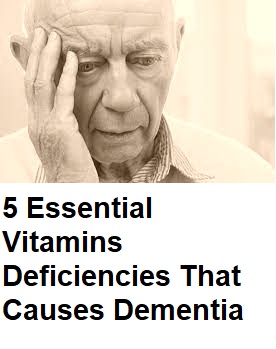 Dementia is a chronic and persistent decline in memory and thinking skills serious enough to interfere with daily activities. Alzheimer’s disease is the most common type of dementia. It involves a set of symptoms including memory loss, problems with thinking, recalling events and concentrating, etc.

A person affected by dementia may also experience a shift in mood and behavior. Dementia is caused when the brain gets damaged by a disease like series of strokes and Alzheimer’s disease. But there are some other conditions like thyroid disease or vitamin deficiencies that can cause symptoms of dementia.

Dementia is progressive and can get worse over time. Research shows that taking certain vitamins may help to slow down the disease and improve cognitive function.

Vitamin Deficiencies That Can Lead To Dementia

Ability to taste, chew or digest food also declines. When the body fails to get adequate nutrition, it becomes susceptible to disease. The deficiency of certain vitamins can lead to dementia.

Here are few essential vitamins that an aging body needs to reduce the risk of dementia.

People who suffer from Alzheimer’s and dementia are often found deficient in B vitamins. B vitamins, particularly B9 (folate) or folic acid and vitamin B6 and Vitamin B12 have been found to play a significant role in preventing cognitive decline and ward off brain aging especially associated with dementia and Alzheimer’s disease, banish depression and help you live longer.

According to the University of Maryland Medical Center, Cholinergic neurons that carry out nerve transmission in a specific part of the brain usually decline in an elderly person suffering from Alzheimer’s disease.

Studies show that consuming vitamin B1 can help to slow the progression of Alzheimer’s disease by enhancing cholinergic neurons and certain enzymes responsible for brain impairment.

Mental fogginess and memory problems are often caused due to vitamin B12 deficiency. Recent research shows that these two vitamins can help to lower the levels of a specific amino acid elderly people can avoid the onset of dementia by taking vitamins B6, B,9, and B 12 on regular basis.

Those who have been diagnosed with diseases like dementia or Alzheimer’s have mostly been found deficient in vitamin E and C. Vitamin C and E are potent antioxidants. Not just our body’s tissues but the brain contains lipids, the fatty compounds which are highly inclined to oxidative damage caused by free radicals.

Recent research suggests that those with a deficiency of vitamin E in the blood are more susceptible to dementia and Alzheimer’s disease. Increased intake of vitamin E has been shown to slow down the progression of dementia and can even reduce the risk of developing dementia by protecting the brain against neuronal degeneration.

Basically, an adequate intake of vitamin E and C can protect or slow down the rate of cognitive decline with advanced age by increasing the flow of oxygen and nutrient to the brain. The suggested dose of vitamin E according to the University of Maryland is of vitamin E is 400 to 800 IU per day

This vitamin is actually a naturally occurring compound of the membranes that surround the nerve cells and help to boost the levels of brain chemicals that assist the brain to process and hold memories.

The deficiency of this nutrient tends to degenerate nerve cells in those with dementia or Alzheimer’s disease.

So adding phosphatidylserine supplement may help to protect these nerve cells from degeneration. The recommended daily dose suggested by the University of Maryland is 100 mg 3 times a day for reducing and reversing dementia.

Zinc is an essential nutrient for the healthy functioning of the body as well as the brain. Most elderly people are found deficient in zinc especially those with Alzheimer’s disease. For improving memory and cognitive function the recommended daily dose is 30 to 40 mg.

The deficiency of the above-mentioned vitamins in your diet can lead to dementia. But taking supplements or a diet rich in these vitamins along with proper hydration can help to avoid one set of dementia as you age.

Plumbing is often misinterpreted as messy, complicated, and difficult work. Most people turn to a plumber as soon as...
Products

Diet tips for a healthier 2021